Every once in a while someone, a bad stand up comic or a relative at Thanksgiving, says something along the lines of, “If aliens were watching, they’d think cats were in charge, and we’re just their servants.” The observation may be followed by an explanation: that we feed and house our feline masters and clean up their feces, etc.

This is exactly the wrong way to think about these things, because in any relationship, the party that cuts the balls off the other party is the one who has the  power.

We don’t think about it this way, because we can imagine being pampered and fed, but not (for most of us) being involuntarily sterilized. We can’t imagine it, so we skip over it, and, gazing only at the power dynamics that are plausible in our lives, retreat into a fantasy of cats.

One of the more notorious blunders in SF is Isaac Asimov’s guess, in the early I, Robot stories, that building voice synthesizers for intelligent robots is too difficult for science, so the robots must communicate through gear-fingered sign language.  It’s obvious now that making a robotic voice is trivial, making pneumatic hands form signs is feasible but incredibly arky, and the real problem is creating robots who can think sufficiently to have interesting things to sign.

I don’t blame Asimov for making this mistake. He could clearly see that mechanical

signing is possible, in a music box / golden nightingale way, but difficult; why not extrapolate that in the future increased skill would make it easy?

He could probably make some guesses about how a robot’s voice would work — spliced phoneme tapes, say. But unlike clockwork automata, which had been around for centuries, this seemed new and strange, and therefore difficult. So he saved speech for the second story.

As for artificial intelligence, Asimov had no way of knowing, in 1940, how that would work, so, like Homer, he just assumed it.

I can understand the temptation to vote for Trump. There are probably many reasons people are tempted to vote for Trump — he is a wealthy celebrity, after all — but the one that tempts me, and perhaps tempts you, too, is the fact that I don’t really like the world as it is. America, like London in 1802, is a fen of stagnant water. There are Kardashians on TV. Everyone’s a dumb jerk. The best lack all conviction and the worst are concerned about cultural appropriation. We spend our time hurting people while being self-righteous about it. The prison-industrial complex is out of control and the educational-industrial complex is beyond redemption. Cheap public water, once one of big government’s shining achievements,  is poisoning people. No one trusts politicians, because politicians are corrupt, and no one trusts their neighbors, because we have all been gulled into a fnord morass of aimless paranoia. It’s all terrible, and I’d love to burn it down..

Trump will burn it all down. He drove his real estate empire to bankruptcy four times, and that’s an arena he’s experienced in, so I’m assuming he will accidentally burn it all down, but putting accidents aside, his rhetoric is the rhetoric of fire and blood. And as “I am not a nihilist in form but I am one at heart” (to quote Allan Arnold’s The Boy Nihilist), I have been longing for fire and blood for so many years.

Trump’s understanding of how we deal with criticism, with immigration, with unpopular religions, just to name three quick ones, is so far from conventional methods that it would require a rewriting of the Constitution, especially the First Amendment but also the limits of executive power, to come close to fruition.Even if you support Trump’s stances, you would have to support as well the evisceration of longstanding constitutional protections.

But heck, if it’s not working, why not rewrite it all? Something new will rise from the ashes.

A lot of us feel this way, I know, and I am in full sympathy with the sentiment. As Robert Graves’s goddess said in Seven Days in New Crete, “When water stinks I break the dam. In love I break it.”

This safety, this system of safeguards is, of course, precisely what we are looking to burn down.

Civilization, I have learned, like the quest, stands upon the edge of a knife. It’s ridiculously easy for everything to fall apart, and this has, indeed, happened with disturbing frequency in history. Sometimes it happens because you get overrun by barbarians, but sometimes it happens because someone had the bright idea that if you burn it down you can start again with something better. The terror or the French Revolution and the killing fields of the Khmer Rouge had this much in common: They both happened right after people restarted 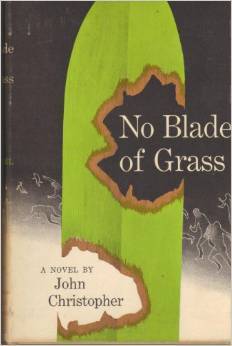 the calendar to celebrate the glorious new dawn. (Actually, they had something else in common, too).

Karl Marx spent a lot of time thinking about how to destroy the old system, under the semi-implicit assumption that once it was gone some mixture of class consciousness and Hegelian zeitgeist would march through the land like progress, dripping a worker’s paradise in its wake. It didn’t, and 100 million people we murdered in one century in his name. The fin de siecle anarchists and tsar-killer nihilists made this implicit assumption more explicit, and they and Marx assumed it for the same reason. We all have some idea about how to tear society down; I have very few ideas on how to build it up. Focus on what you know.

Hey, I can break a motherboard, too.Pass me the hammer and assume what comes next will be better.

V (for Vendetta) put on Guy Fawkes’s mask; but Guy Fawkes had a plan. He had a parliament in mind to replace the parliament he was going to blow up. V admits he does not. He’s here to burn it down, and building it up is a job for the sequel; there is a reason no one, not even a money-hungry Time-Warner shill, has ever written the sequel.

We have to make sure that we do not, as Homer Simpson did, sweep the parts we do not

understand under the rug. We have to understand life after we burn it all down will not be “sort of like this one, but with more equality.” If you and your family were not massacred yesterday, either by a government killsquad or by a pillaging horde, you must understand that this is a minor miracle, made possible only by the vast web of stupidity and kitsch that I don’t like any more than you do.

Everyone has a lot of fun ridiculing Trump supporters, in part because it lets us signal our class and in part because it’s fun to hurt others. I’ve done it myself, and I’ll do it again, probably [ETA: I did]. But I want to appeal to you for a moment without ridicule; as someone who hates a lot of the things you hate. A Trump presidency would be hilarious, true, but it would be more than just hilarious; it would drive your PC buddies crazy, but it would do more than just drive your PC buddies crazy.

This castle is built on sand, and we all have to acknowledge that; it is very fragile, and we must remember that a castle built on sand is better than no castle at all.

Imagine, if you can, no castle at all. You’ll know you’ve imagined it successfully if you recoil in horror and say, “Whoa! Don’t want that.”

If your reason for supporting Trump is anything like my temptation, I hope you can see that this is one abyss you don’t actually want to stare into. There are any number of warlord-filled failed states on one hand, or autocratic nightmare states on the other, to make anything other than gradual snailing towards improvement look like a risk not worth taking. Say what you will about political insiders, they have a huge incentive not to destroy the teat they suckle at. (Teat=castle. I don’t always control my metaphors.)

If you’re just really into rich celebrities, I guess Trump remains the candidate for you..