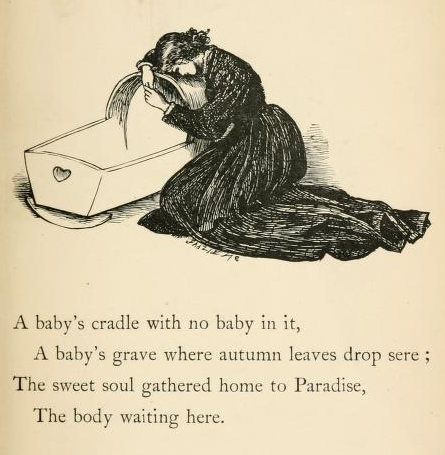 Before they killed the gay character, and before they killed the black character, authors killed children. In the nineteenth century, childhood as a concept was relatively new, and the first thing that happens when art recognizes your demographic is that it kills you off to generate some pathos. I can’t really give examples without spoilers, but it’s your fault if you follow links. (There may not have been many gay or black characters to kill in the nineteenth century, but at least one of those links is a twofer.)

An 1864 children’s book, German Socks, by “Aunt Fanny’s Daughter” (Sarah L. Barrow, cashing in on her mother’s existing fame writing books under the name “Aunt Fanny“), is composed almost entirely of stories of good little children dying. German Socks is the third book in a  series of six short-story collections (the “Sock Stories”), but I haven’t read the others to determine if every book in the series continue this morbid parade of infanticide.

The convention (I’m not going to say trope) of killing off children was so prevalent and kitschy at the time that Oscar Wilde got to quip (minor spoiler) about a popular novel: “One must have a heart of stone to read the death of little Nell without laughing.”  Although literature has been killing off children for a long time, these deaths, with the possible exception of accounts of child martyrs, had not been aestheticized. Suddenly, killing children was pathetic but charming, like a hobo clown.

(The “Death of the Dove” narrative poem (from German Socks, naturally) is another twofer. The dead dove comes back from heaven to lead the soul of the dying girl to the “nest.”)

Dead animals are never quite as pathetic as dead children (which I guess makes sense). Death for animals is often nothing more than a convenient way of finishing a story. In Grimms’ tales, a story about a bunch of animals will likely end with most them getting murdered: “The Mouse, the Bird, and the Sausage,” for example, or “The Owl”; in the Grimms’ version of the tortoise and the hare, “The Hare and the Hedgehog ,” the hare literally runs himself to death; I understand the Grimm world is a scary violent one, but the last line of “The Death of the Hen” (on point!) is: “And then everyone was dead.”

like  “Here’s the end of the one-two-three: / The snake ate the frog and Miss Mou-sey” (Woody Guthrie/Cisco Houston version) or (with sounder arithmetic) “So there was an end of one, two, three, / …The Rat, the Mouse, and little Frog-gee” (Caldecott version). More modern, more literary works, are not immune to this rather bathetic ending.)

Animals dying has always been kind of funny, which explains a lot about Tom and Jerry cartoons. Even an ostensibly tragic piece like “The Last Dying Speech and Confession of Poor Puss” by Ann and Jane Taylor, who have never been accused of having a sense of humor, can’t help but come across as a parody.*

Probably the most popular representative of the dead animal genre is Cock Robin. Cock Robin, like Froggy, is famous for two things, getting married and dying, although Robin does it in two distinct works, both famous as nursery rhymes. His tale is printed in really an impressive number of chapbooks throughout the nineteenth century.

In this edition from 1824, Robin marries Jenny Wren, the birds dress in formal wear, everyone eats pie, and there’s a happy ending. (No monkeys are mentioned, although they appear in the frontispiece, left.)

The same marriage, the same pie, appear, although with different (=worse) versification, in this ca. 1820 edition; But here, rather than end on a high note, the poem kills off both Jenny (by hawk) and Robin (by arrow).

The ambiguity of Jenny’s departure—possibly eaten, and possibly simply throwing Cock Robin over for someone higher up the food chain—is perhaps intentional, and scarcely resolved by the illustration (right).

Cock Robin is better known, of course, for his first appearance, in “Who Killed Cock Robin?” (first printed in 1744, but presumably from older oral tradition). This poem is well known and gets referenced everywhere (for example in the title of a Jean Craighead “My Side of the Mountain” George book, or in a W.S. Gilbert play) so you already know who did it.

“I,” said the sparrow,
“With my bow and arrow
I killed Cock Robin.”

All the animals then join forces to throw a boss funeral. All the animals, but primarily birds—even the bull usually depicted pulling the bell (from this 1830s edition, for example, right) is probably supposed to be a bullfinch. (Note that

this edition follows the now-antiquated custom of accompanying an illustration with a rhymed explicatory couplet, even though the text already explains the illustration. These rarely read verses would plague British comic books well into the 1940s.)

In most versions dating after 1770, such as this idiosyncratically-punctuated edition from ca. 1840 (below), Ms. Wren shows up, although not as Robin’s wife, but rather with a Cock Wren (!!!)

to serve as pall bearer. To increase the scandal, Robin’s “love” is identified as the Dove.

You might assume that the Cock Robin from the wedding is simply not the same as the Cock Robin from the funeral—no one expects the Jack who goes up the hill to also jump over the candlestick—but the texts often assert this identity. The already-cited 1820 edition, which is really quite incompetent in its butchering of the verse, for example, has two chapters, a wedding and a funeral, and Occam would red pen anyone claiming their juxtaposition is accidental.

To increase the continuity nightmare, Jenny Wren got her own chapbook,  in which she falls ill, gets better, acts like a jerk, then falls ill again and dies. Her incompetent doctors, whom Robin calls quacks and chases with a whip, include a fox and a cat, which may not be the best choice for a wren. (There is also a goose,

(Many, but frustratingly by no means all, of the pages of this book have the rhymed commentary below the picture, ancillary to the main action, which is rhymed above the picture, similar to the couplets from the “bull” page above.)

The Wren book ends with a doggrel advertisement encouraging the young reader to buy more at the same bookseller:

Now if you’d more of Robin know,
Where you bought this I’d have you go,
And then, for what for this you gave,
You there Cock Robin’s life may have.

The “life” referenced is presumably this book, from the same publisher, which just contains the familiar “‘I,’ said the sparrow” text, with explicatory couplets, but is rather pretentiously titled “an elegy.”

The sparrow does not get off scot free in the drama. A ca. 1813 chapbook chronicles his trial and (spoiler) execution. This may not be a unique text (another account of Sparrow’s trial appears to be here, judging by the cover), but it’s the only one I’ve read.

Here, as in the death of Jenny Wren, the cat is a doctor, but this time the dog soberly points out that this particular doctor is liable to eat his patient. Sparrow is found guilty (he did, after all confess in line two of the the Mother Goose rhyme). And Justice Hawk carries out the grim execution himself, eating the culprit afterwards. (This one does have a monkey! And he falls on his bottom!)

Have fun at the funeral, kids!

A later publication, not a chapbook but a full-on picture book with illustrations by E. Morant Cox from 1888, draws two parallels between the story of Cock Robin’s death and older texts. Most of the book is the familiar “Who Killed Cock Robin?” poem, but it opens with another poem of equal age, the most vulgar entry from Tom Thumb’s Pretty Songbook, originally printed in 1744 as:

Later collections clean it up (“…and wiggle waggle went his tail,” etc.) and Cox of course follows the bowdlerized version. But his edition remains the only attempt to draw these two earliest Mother Goose rhymes (Tomb Thumb’s, in which both “Little Robin Redbreast” and “Who Killed Cock Robin?” first appear, is the oldest extant nursery rhyme collection ) together. 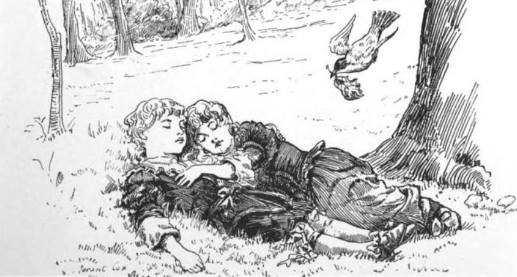 More extraordinary is the assertion that Robin participated in one of the “Romantic dead children” stories referenced before. The babes in the wood, a horrible British version of Hansel and Gretel in which the kids instead of finding a gingerbread house just up and die, ends with birds covering the corpses with leaves; the bird leading the charge, Cox’s book insists, was Cock Robin. 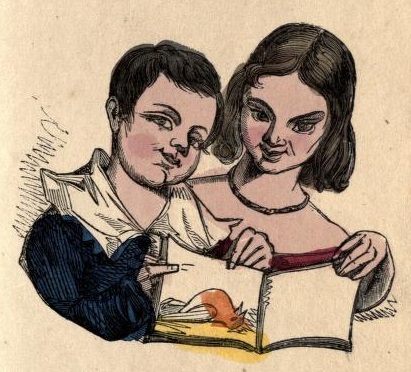 Attempts to drag memory of an ancient Frazerian dying god from Cock Robin’s death exist, but are are probably, like most nursery rhyme analysis, malarky. Nevertheless, the original poem, with the bragging sparrow, the senseless murder, and the community of mourning animals is so inexplicable and weird that the Cock Robin “expanded universe,” even with its attendant incoherencies, can’t help but weaken its power.

Speaking from 200 years later, I must say that the whole thing strikes me as a strange subject for a children’s tale. Just look at these horrid little imps, proudly showing you not even a proper dead bird but their beloved book about a dead bird! I can’t even tell which way the binding’s bending.

*I don’t want to sound crazy, but speaking of the Taylor sisters and parody, I have a theory that the Jane Taylor’s most famous composition, “Twinkle, Twinkle, Little Star” is a play off William Blake’s “Tyger, Tyger.” Both poems ask tough ontological questions about burning objects in the night sky/forest of the night, and the similarity in cadence, especially in the first line, is inescapable.

← The Clickbait in Our Language
The Partridge Family Prophecy →