Text of My Speech from the ILA Conference 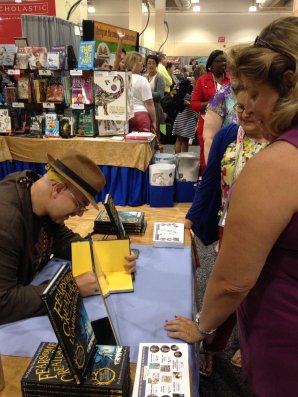 I spoke this weekend, along with some other authors, at the International Literacy Association conference in Boston, on the topic of “Fantasy Creatures, Heroes, and Feats That Engage Readers” (followed by a signing, depicted).

This is the text of my speech, below. It’s not in full sentences all the time, because I was trying to memorize it as written, and my public speaking persona sounds somewhere between Bob Newhart and Woody Allen, only with a Midwestern accent that I don’t usually have. In some case you may need to imagine me gesturing with my hands to make sense of anything. But that’s the danger of oral tradition, right?

If you would like me to say the same thing, pretty much word for word, at your own literacy conference, please contact me or the good people at Workman.

I wanted to talk a little bit about folklore and mythology and kids books. And obviously myths have been things kids have been reading for a long time. Think Bullfinch, and Nathaniel Hawthorn’s Twice Told Tales, those’re over a hundred years old. I love this stuff, I loved it when I was a kid. And when I was a kid I was very moved by this one Krystyna Turska picture book about Pegasus.

But there’s another strain of folklore or oral tradition that kids read, that’s even more canonically kid focussed. It’s the fairy tale or folktale tradition, and it’s kind of an antitradition. You know, in Greek myths Theseus is a prince, Jason from the Argonauts is a prince. And fairy tales are full of royalty, too, sure, but in fairy tales, it’s always the youngest son that succeeds to the throne. The peasant or the tailor becomes king, just as the girl in the cinders becomes queen, which is not supposed to happen in real life. The village idiot outwits everyone, and the prey defeats the wolf. These are stories of outsiders who make good.

This seems more American, right? I don’t just mean that the village idiot becomes king, which is maybe a little too American nowadays, but it’s not a European feudal tradition, it’s essentially an egalitarian tradition, right? Horatio Alger and Abraham Lincoln.

Because the source material for this book, this is a book about monsters, and they’re based on monsters collected in 1910 by a forest ranger in Minnesota, William Cox. And Cox had written a book, and I think this is amazing, with pretty much zero human characters. They’re background characters right, they’re walk-ons at best. It’s a monster book. It’s just a bunch of profiles of monsters.

And when I said I loved a book about Pegasus, well the story of Pegasus is really the story of two monsters fighting it out with some human kind of getting in the middle. Because pegasus is a monster, right? Pegasus is born from the neck of decapitated Medusa. There’s only one Pegasus. And he fights Chimera, who’s one third lion and one third goat and one third snake or dragon, all breathing fire. A great monster!

You know, when I was writing this book I read a lot of folklore and folktales, to prepare, and I read Burno Bettelheim’s book the Uses of Enchantment, and it suggests in there that kids like reading about ogres or giants because they’re authority figures, they’re big, right, they’re parental stand-ins that the kid can oppose and defeat without the guilt of, you know cutting down a beanstalk and killing dad. But I think that’s not really right. I liked reading about giants when I was a kid, because I liked to pretend I could smash things. Kids are smaller than everyone else, but giants are bigger than everyone else. Monsters have power.

You know, honestly, I don’t actually know anything about literacy. I’m literate. But…I don’t know if I should tell you this, but my sister is a professor, she teaches literacy education, and at our Fourth of July barbecue I told her about this conference and I asked her, “Give me some buzzwords I can throw at them to make me look like I know what I’m doing.” And she, right away she said, “engagement,” and I was like, “I can’t say ‘engagement,’ ‘engage’ is in the title of the talk. That’s not going to fool them.”

When I write in the folktale tradition, and that’s what I was trying to do here, write in the folktale tradition, I was talking my monsters from a legitimate source, or as legitimate as we have about lumberjack monsters, and I tried to take my plots from traditional folklore sources. Because William Cox had written that book of just monster profiles, but profiles without stories attached to them.

You probably already know about the Aarne-Thompson folktale index. I read about it when I was in high school and it blew my mind. I was obsessed with it! And if you don’t know, it’s like a TV tropes for folktales. It categorizes folktales into different types, you know, “The Shepherd Cries Wolf” is one we all recognize, or “Beauty and the Beast” is another, and that’s a very old one: In the second century Apuleius wrote, or recorded, the story of Cupid and Psyche, where Psyche has to marry a dragon creature and she’s forbidden to ever look at her husband, he’s so hideous. It all turns out all right. And that’s Beauty and the Beast 1900 years ago. There are Cinderella stories even older, with the shoe and everything.

And the index also has—smaller than types—a catalogue of motifs, commonplace things that happen again and again in fairy tales, like the sleeping princess is awakened, and we know that from both Snow White and Sleeping Beauty, but it’s also a medieval story, in the Volsung Saga, it’s in Wagner’s Ring operas innit? Or the third prince succeeds in his quest, we already alluded to. Or ants help you separate seeds from each other, that’s in Cupid and Psyche. Or if you’re polite to the old woman she tells you the trick, or you spit up gold or something, and if you’re rude to her she doesn’t tell you anything, or you spit up frogs.

And I would sit with a copy of this index in the New York Public Library, and it’s, it’s just a fount of ideas, the building blocks of stories. Vladimir Propp, he was a Russian folklorist from the ’20s, and a critic of the Aarne-Thompson index, but he used the ideas of motifs, similarly, he assigned symbols to them, and then he’d build what looked like mathematical equations out of these symbols in different positions, and if you memorized all his symbols, which I never did, you could read his math and come out with a folktale. If you haven’t looked into this, you really should because these are like the phonics of narrative. You put them together and a story comes out; it’s amazing.

A lot of the stories in this book, Fearsome Creatures, are cobbled together from traditional motifs, sometimes from Aarne-Thompson, but sometimes just things I induced from other folktales, other American folktales, especially from from the tall-tale tradition and from ghost stories. I knew when I did it that I was taking stories that had been shaped and perfected long before and by other people. It’s almost cheating!

But because this is a pretty obscure corner of the folklore section I could probably have gotten away with it. But I’m enough of a postmodernist that I’d rather steal than make something up. Especially if what you’re stealing is something already tested.

I should probably say more about the heroic now, like Thomas Carlyle, but I’m more of an antihero. I know what side my bread is buttered on. So if I have tiiiime I want to say something more about oral tradition instead.

And kids have an oral literature of their own, jumprope rhymes and that cluster of semi-forbidden rhymes along the lines of “Jingle bells, Batman smells” and “Glory glory hallelujah, teacher hit me with a ruler.” Folklorists love children’s rhymes and things because if you’re studying how traditions get passed from generation to generation, usually you have to wait twenty or thirty years, but with children’s culture they pass it along to and move on every couple of years, so there are many more iterations of, you know, eenie meenie minie moe than of any adult custom. This all means that your students live their lives much closer to an oral culture than we do. This may all be changing, everything’s changing, but maybe for a little while longer kids have an affinity for oral tradition.

And I’m aware of the irony of encouraging people to read folktales. I mean, once you write it down you sort of lose your right to claim to be one of the folk. But so it goes. Maybe we’re all the folk.

That’s what I wanted to say.

← My Plan for Revenge
Are We Getting More Child Molesters? →