People talk about bad opening lines, but as far as I’m concerned there’s always been only one “worst” way to open a story or especially a novel, and that is with lines of unattributed dialogue. The text on the left, from Mysterious Island by Jules Verne (some hapless translator may be to blame) exemplifies the worst traits of this technique: the “exciting” but contextless exclamations!; the overdramatic  in medias res that practically jostles you with its elbow and smirks, “Bet you want to know what this is all about, eh? eh?”; and especially the naive second paragraph, starting, “Such were the loud and startling words…”

We would also have accepted, “These were the words that so and so uttered…” or “With these words, so and so arrived upon the scene.” It’s unendurable.

Look how long the passage on the right makes you wait for even a bare “asked David” tag. With slightly broader leading it would have been on page two! Who starts a book this way? (The answer is Horatio Alger, in Cast Upon the Breakers.)

Compare with the opening of another Horatio Alger book, The Western Boy.

“How do you feel this morning, Jacob?” asked a boy of fifteen, bending over an old man crouched in the corner of an upper room, in a poor tenement house, distant less than a quarter of a mile from the New York City Hall.

“Never you mind about that, Jacob. I can earn money enough for both of us. Come, now, you’d like some coffee and eggs, wouldn’t you?”

This isn’t well written, of course, but it’s just normal bad. It is, in a word, endurable, and all because Alger bothered to set the dialogue in a particular place, and sketch out the people involved. Their palaver may be insipid, but it’s not the desperately false excitement of two disembodied voices.

So I had always considered the floating dialogue technique to be the lowest method of opening a book, the very worst decision an author could make. And then today I came across H. Irving Hancock’s Bountyville Boys… 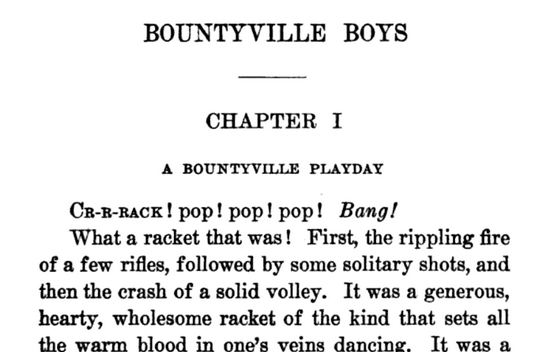 ← Science Fiction Senses
Yes, Virginia, This Is a Conspiracy Theory →