The Inconvenient Truth about Al Gore

The only time in my life I seriously doubted anthropogenic climate change was immediately after watching Al Gore’s mockumentary An Inconvenient Truth. “If he really has so much evidence that humans cause global warming,” I thought as I watched, “why did he make a documentary so devoid of it? Why the obvious fraud and fakery? Why is the only study he cites 1. miscited and 2. so flawed that it should probably be thrown out?” The documentary temporarily persuaded me that there was, in fact, no reason to believe global warming had anything to do with humans.

It’s possible that Al Gore is a complete moron, and accidentally made the world’s worst documentary, but if he’s so dumb what’s he doing palling around with Stephen Hawking on Futurama?  It’s more likely, isn’t it, that he deliberately made a false flag documentary, 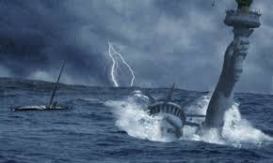 one designed to persuade viewers that global warming was a huge scam.

The plan didn’t work, of course. No matter how stupid his documentary was, most of us fell for it. After all, none of us pay attention to facts, we pay attention to emotional cues and signals. That’s why movies no longer have screenplays. That’s why the medicine commercial says that side effects include spontaneous decapitation but in picture is of a a golden retriever catching a frisbee in slow motion, and I order it anyway. I’m not immune; I may not have even noticed that An Inconvenient Truth was all fraud if I hadn’t seen it while trapped on a plane with a scientist, and we had nothing better to do than to make fun of Gore’s charlatanism.

What kind of creature could have such a benighted understanding of human psychology that it might believe humans would turn in shame from obvious lies, instead of falling for them? I would guess an insect or a reptile. If the documentary had been designed to prevent people from taking action against increased oxygen content in the atmosphere, I would guess that Al Gore was secretly an insect; since he instead is clearly trying to prevent people from taking action against global warming, he must be a reptile, most probably a lizard.

A lizard Gore explains many things, including Tipper’s attraction to him. But still, I will admit that the theory is a stretch to believe. Sur

ely if Gore were a lizard, someone would have mentioned something before now. I mean someone more reliable than David Icke.

It so happens that someone did leave a clue confirming the truth of this theory. That person is Gore Vidal.

Vidal left clues about this inconvenient truth throughout his life; he frequently mentioned he was Al Gore’s cousin, just as mammals are cousins to reptiles. He wrote two books about time travel, obviously hinting that he had himself traveled through time to issue his warning.

Powerful forces — they even got to the Nobel Prize committee, after all — conspired to keep Vidal’

s message secret, of course, but he outflanked them by hiding the truth he brought in plain sight. Every time anyone says the name “Gore Vidal” one speaks the hidden truth.

From his position in the future, Vidal (or his creators?) would know many things about the past world, the world we think of as the present. He would know that the seminal TV miniseries and franchise V (1983) would, despite its phenomenal success, suffer from a dearth of marketing tie-ins.  In fact, only one action figure would be released in America, despite V‘s release during an action figure boom. Compare the number of action figures released for not only the Star Wars movies, but such relative ratings failures as Space: 1999 or Battlestar Galactica. V had one figure, and furthermore it was a 12″, an outmoded size more frequently referred to as a “doll.” (All of these strange-but-true facts should have been a red flag, of course.)

Gore Vidal’s name, homophonic with “Gore V doll,” indicates that  Gore is best exemplified by the V figure. So to learn the truth about Al Gore, we need only look at what character the V figure represents. 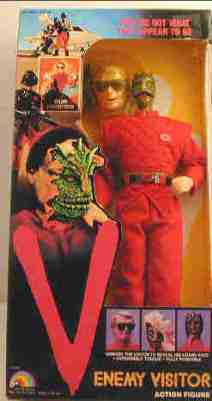 ← The Domination of Phoenixes
Problematizing Dissent →