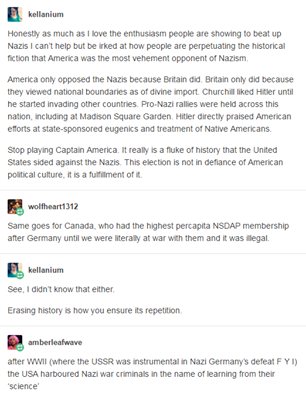 If there’s one thing I’ve learned about history, it’s that history is really big, and filled with disparate facts,  and an unscrupulous person can pick and choose to prove just about anything.

So I saw this exchange, clipped and “memed” and passed around and I have no reason to believe much of what it says is false.

The USSR, for example, was certainly “instrumental in Nazi Germany’s defeat F Y I,” and let no one dispute it. Lyudmila Pavlichenko and the rest of the Soviet army killed a lot of Nazis. It’s possible the USSR could have defeated the Nazis even without the US entering the war (although perhaps with US cash still flowing in?). It’s possible that without the USSR in the war, Britain would have fallen and the whole thing would have dragged on for another year. It would have been terrible, by which I mean even worse than it was.

But if we’re going to have a conversation about the “historical fiction” of a “vehement opponent of Nazism,” it is perhaps worth noting that Stalin literally conspired with Hitler in his conquests; that the USSR’s nonaggression pact with Germany is what made Hitler’s plan possible in the first place and is the #2 cause of the war in Europe (the #1 cause is that Hitler wanted it).

The US  “harboured Nazi war criminals” for the same reason that it teamed up with Stalin in the first place: to stop a crazed genocidal expansionist dictator (different dictator this time). Wernher von Braun was hardly a threat to Western Europe in 1945, when he came to America. In a juster world, yes, he would have been punished for his crimes, but in a juster world Eastern Europe would not have jumped from the frying pan of Nazi domination to the fire of Soviet domination, and Stalin would not have died peacefully in his bed. Soviets = Nazi fighters while US = Nazi harborer is not false, but is certainly misleading.

(And what’s with putting Nazi “science” in scare quotes? It wasn’t Nazi phrenologists who came to America. It was real science the US was getting.)

I realize that’s all a problem with the final, johnny-come-lately commenter. But take it from the top. Saying the US only opposed Nazis because Britain did is a weird view of history; it would probably be closer to the truth to say that the US opposed Nazis because Hitler declared war on the US after Pearl Harbor. FDR had opposed Nazis for a long time before that, and official US policy, even in neutrality, skewed pro-Britain and anti-Nazi. It’s also weird to dismiss the belief that countries shouldn’t invade and take over other countries as the belief that “national boundaries [are] of divine import”; do we really want to pretend that being opposed to conquest is some kind of nineteenth-century superstition? If the British were really so fanatical about boundaries, wouldn’t they have stood up for Czechoslovakia in 1939?

Churchill was certainly opposed to Hitler before he started invading countries. That’s why he was made Prime Minister in 1940, because he had “called it” earlier that the Chamberlain’s soft-on-Hitler policies would lead to disaster.

And although hindsight lets us hate even baby Hitler, it was possible for a decent, rational person to like Hitler in the mid-’30s. Germany’s Weimar Republic, which he took over and dissolved, was an unmitigated disaster.  It would be possible to look at a list of Hitler’s economic achievements while not paying much attention to his militarism or anti-Semitism, which may have seemed a small price to pay, or may have been insufficiently stressed in your sources. Although it is now clear that Hitler was unique in his anti-Semitism, this may not have been clear in the 1930s. Remember that thuggish dictators ruled Spain, Italy, Portugal…oh yeah, and the Soviet Union. The fact that Hitler was different from, and worse than three quarters of these guys would require a 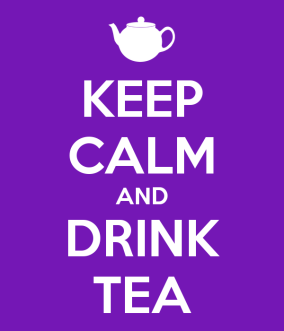 Countries are not monoliths, although we often pretend they are in retrospect (e.g. in the preceding sentence). WWII-era Britain we now see as a “keep calm and carry on” stiff upper lip against the encroaching Gillette of Hitlerism. Read Orwell’s wartime diaries, though, to get a first-hand account of a country that is really scared; that has people who want to give up; that has people who support Hitler—not because he’s a fascist (these are Orwell’s friends, after all) but because he’s destroying bourgeois France and is at this point a good ally of Stalin. In the end, the British, on the whole, fought against Hitler so we say they are anti-Hitler; but there were a lot of British people alive in the war, and each one had a unique perspective, and not all of them said “blood, sweat, and tears” with one voice.

Even administrations are not monoliths. FDR was, as noted, pro-British, but his wartime vice-president, Henry Wallace was vocal in his contrarianism; the British sent Roald Dahl (!) to spy on him because they were worried about a powerful anti-British (specifically: anti-imperialist) politician.

Certainly there were pro-Nazi rallies across America. Certainly many Americans were pro-Nazi, especially before the end of 1941. Captain America fought Nazis first because one group of Americans that tended not to be pro-Nazi was Jews: and Captain America was created by two Jews, for a company run by Jews, in an industry dominated by Jews. If comic books had started in Pennsylvania-Dutch country, they probably would not have been as eager for war in early 1941 (when Cap punched Hitler for the first time, in violation of US neutrality policies).

Or you can cherrypick to make things work out how you want and say that one side is a “fluke of history” and the other side is somehow more legit. It’s intellectually dishonest, but it can fool people on Tumblr. Guys, Oscar Schindler proves that Nazis were actually saving Jews, guys!

Because the number of Canadians who were members of the Nazi party should not be forgotten. But not mentioning them when you talk about Canada’s war effort is not necessarily bad. History books are a zero-sum game, in the sense that you only have so much room in them; articles about WWII are a zero-sum game, too, and editors are always cutting for space; headlines are heck yes a zero sum game. If you only have room to say one thing about Canada and

Nazis, saying “Canada fought a war against Nazi Germany” is a more important use of your space than “many Canadians were Nazis.”

American eugenics, and the history of Native American policies should also not be forgotten. But in this context they are non sequiturs. (As is comparing this election to Captain America or WWII or whatever rhetorical leap we’re supposed to make.)   America’s a big country that has been around for hundreds of years; it has usually voiced opposition to imperialism, except around the turn of the last century when it annexed the Philippines; it voiced an unprecedented call for egalitarianism at a time when it was also the Western World’s biggest slaving states. Balancing these contradictions isn’t always easy.

The US’s sometimes tepid opposition to Hitler is only a contradiction if, as this exchange seems to want to do, we pretend that Hitler was only bad because he was racist. The US was racist too, so they’re the same! In order to pull off this sleight of hand, the fact that Hitler tried to conquer Europe is swept away with the flourish that national boundaries are superstition; that fact that he ran an anti-democratic totalitarian terror state where opposition was outlawed is just…erased.

We should never forget that what counts as historical consensus, what is the most important thing to stress given a limited space, can be controversial. Since everyone wants, ex post facto, to have been anti-Nazi, it is tempting to spin things this way. “Despite strong resistance, Austria fell to the Nazis” would be as misleading as “the Czechs wanted to be part of Hitler’s empire all along.” So it’s important to hear out contrarians who might have an incentive to spin things another way, possibly a more accurate way.

But when we share this exchange, we’re not sharing  debate or a vehemence ranking. We’re sharing a gripe about Americans “playing Captain America.” We’re sharing a demand: you must stop! We’re also sharing a bunch of fictions (every sentence with the word “only” in it).

We’re sharing a solution to a problem. Almost every demographic is opposed to Nazis; how can I distinguish myself from  those people while still insisting that I’m opposed to Nazis? The solution, of course, is to insist that other people are not sufficiently opposed to Nazis. Even the people who literally fought and died opposing Nazis are small potatoes, are actually kind of pro-Nazi, because of Native Americans; only I, who have never met a Nazi, am the true resistance.

← More Fun
In Which Salon Is Half-Right →