Quickly, then, because this is easy. It’s mostly just review.

I wanted to talk a little about this article, but mostly about Ranier “tLLoaAG” Maningding’s reaction to it. (Ignore those 53 tabs; we all have our problems; ignore that date, I’m running behind on everything.) 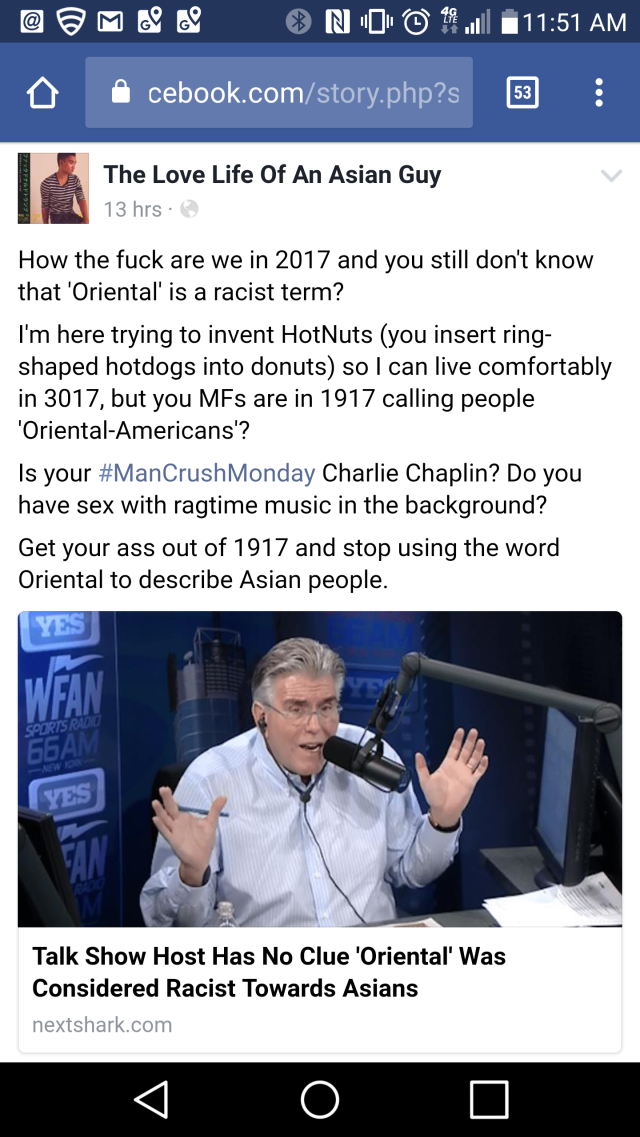 We shouldn’t make too big a deal about things, because, as far as the internet goes, everyone’s behaving civilly. The talk show host said he’d change his vocabulary, and Nextshark let him off with a benign “There is clearly a long way to go in educating people about Asian America.” (Compare the Nextshark article, actually written by Maningding, that calls Roy Thomas “racist trash” for using the same word.)  No one’s getting fired. Everything’s OK.

What’s interesting is how demonstrably wrong Maningding is, and how successfully he has obscured the past. He’s correct that “oriental” was not a racial slut in 1917; but it was also not a racial slur in 1977. Edward Said did not publish Orientalism until 1978, and while it’s possible some academics had discussed obsolescing the name before 1978, it would not have been much before 1978, and it would not have been many academics. For any kind of wider audience, and I mean wider just in academia, you don’t start until Said; and he’s just the very beginning of the conversation. When I was in academia in the ’90s the shift was only then happening for real; people from the “outside world” were coming to college and learning a new vocabulary, learning that oriental was not quite offensive but a little antiquated, like the word gal. This is admittedly a parochial view of things, but it’s important to note it is not a strictly white view of things.

Hey, we all know language changes. Six hundred years ago, turtles could fly—because turtle meant turtle dove, and the word turtle for a reptile had not yet been invented. There are weird articles in which people try to articulate why the word oriental is offensive (see here and here), but there efforts are doomed to failure. Meaning is almost always arbitrary; you can’t ask someone why. But when a change happens in living memory, we can’t help but ask why. Maningding has to push things back a century in order to make it sound like only a real moron would not have gotten the memo (yes, I know he’s joking, but he’s also clearly not joking.)

But this is why it’s easy; this is why it’s a review; we already know the why here. When Newshark talks about educating people, it is being disingenuous. The purpose of tabooing a word in to make sure some people are not educated.

Look at the hapless talk show host who right there in the headline “has no clue.” Try to imagine his life cycle. First: He learned a word that was not offensive. Then (at some point before the 1990s) he left academia if he’d ever been there. And while he was gone people changed the rules. Remember (if you forget everything else I say, remember this), language does not “just change”; people change language. Someone decided to change the rules. They did not do it because they had built a new machine that detected offensiveness where no offensiveness was detectable before; they did not do it because new equations demonstrated that a previously benign word was actually secretly offensive all this time. There was no technological breakthrough. There was no new data. People decided not that oriental was offensive but that it should be offensive.

If you’re Maningding you can call the other “racist garbage” or some such, which is how one behaves on the internet. If you’re more sober you can speak of “educating” the Other; but of course educating the Other is what you must never fully do. If you educate the Other, the Other might join you—and then who would be Other? How could you spot the Other if the Other has a star on the belly?

One of our current obsessions is regulating discourse, and this puts me in a strange position. Simply by writing the above paragraphs, I’ve by necessity put myself in a box. Every once in a while someone forwards me a George F. Will (or whoever) essay about how cultural appropriation is silly because cultures ought to share; and the implication is that I agree with George F. Will. I sort of agree with George F. Will. But I also want to distance myself from George F. Will. I don’t like the essay he writes (or would write), I don’t want to write that essay. His essay is for people who already think cultural appropriation is silly. It’s so easy to drag up examples of the nincompoopery of some element of the internet left but that’s mostly a distraction. “Someone somewhere said something dumb” is not a very good headline, but it’s a headline we see again and again, as though it were news.

When we choose a new term, and taboo old terms, we always choose a term with problems. Asian manages the unlikely feat of being vaguer than oriental was. Latinx comes automatically gendered, and therefore needs an unnatural x ending to remain inclusive. African-American is not only much longer than even the sesquipedalian $10 words people gripe I’m too partial to, but also overly specific compared to black (try talking to careful progressives about the superhero Black Panther; they will not be able to come to grips with the fact that he is not the first African-American superhero, because he is not in the least bit American; I have witnessed this first hand). Not all black people are American; and not all black people are African. What word can you use then? The term African-American was selected specifically to cause this confusion. These are speedbumps designed to prevent the outgroup from using our terms. They are speedbumps designed to keep the outgroup out.

Note that I’m not suggesting any particular word is “not offensive.” You may well be offended by a word, and I’m in no position to tell you your emotions are wrong. But take a moment to notice how it is that you became offended by the word. You’re being manipulated. Not that Maningding is manipulating you, for he is probably being manipulated in turn; but in order to make himself a more perfect pawn, he has to close his eyes, rewrite the past and live in a fantasy world where the arbitrary habits of the outgroup are by necessity things that demonstrate they are ignorant and bad.

Our job is not to be not offended; our job is simply to be less willfully ignorant than Maningding.